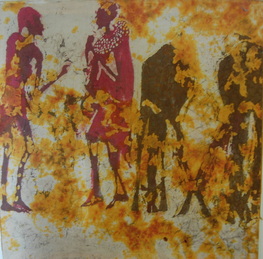 The history of African batik is extremely rich and old and while it is indisputable that the art of batik was perfected in Indonesia, it’s roots more than likely lie in Africa. Some of the earliest batik fabric has been found in Egypt where 4th Century BCE mummies have been found wrapped in bandages decorated with resist patterns. These patterns contained spells that were meant to assist the dead in the journey into the after life.
In other areas of Africa the art of batik developed somewhat differently. For example, the Yoruba people of Nigeria who have the most well developed batik technique, make a type of fabric known as adire cloth using a resist made out of cassava paste. There are two types of adire cloth: adire eleso and adire eleko. Adire eleko is the method, which employs cassava paste as a resist while adire eleso uses tying and stitching as a resist. Adire eleko is the method most often considered to be batik.

There are two kinds of adire eleko, one which is created by women and one which is created by men. Adire cloth created by women is done by freehand drawing on cloth with items such as feathers, sticks, bones or other tools specially created for applying the resist. Men use a different type of process for creating adire cloth which involves using a special tool to force the resist paste through a stencil in order to create a repeating pattern. In addition to this traditional batik method, in the 19th century the Javanese style of batik was brought to Africa where the Sub Saharan people adapted the Javanese techniques to create their own style of batik that employed thicker lines, large motifs and more color.